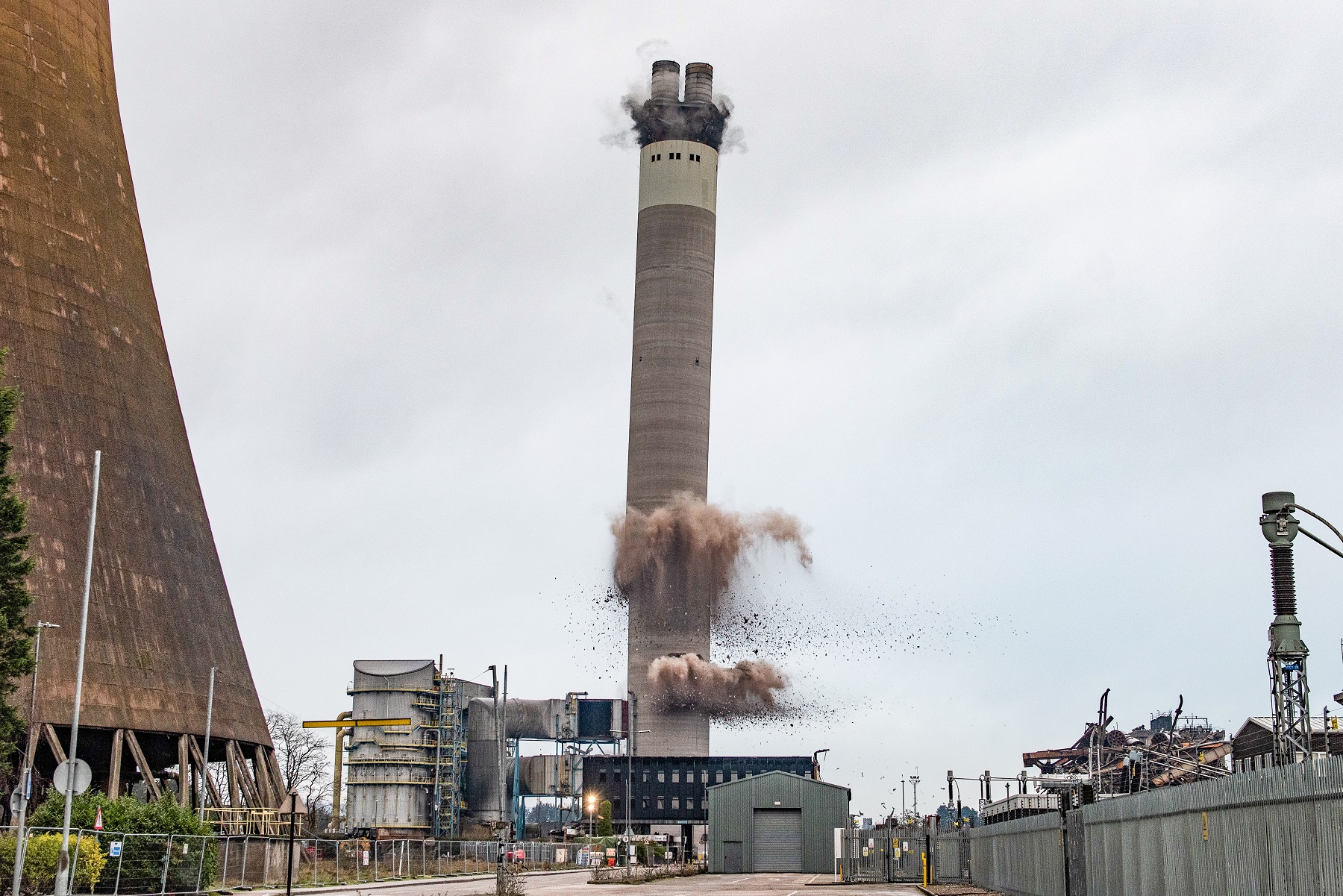 In 2016, the iconic coal-fired Rugeley Power Station ceased production of electricity, in a landmark decision that marked the site’s regeneration. In a recent article for IExpE, decommissioning consultants Richard Vann, managing director, and Matthew Waller, operations director (both from RVA Group), explored the role that explosives engineering has played. If you missed it, catch it in full below…

Like many coal-fired power stations across the UK, Rugeley has long dominated the skyline in Staffordshire. The 139-hectare site – with its iconic chimney and cooling towers – has been an energy generation hub at the heart of the community, since the 1960s.

Key to the economic and social lifeblood of the town, it ceased production of electricity in 2016, and in early 2020, the local authority granted permission for a scheme that would transform the disused space into a sustainable and innovative mixed-use neighbourhood.

With a widely-voiced commitment to embracing a greener and more efficient world, site owner ENGIE has a clear passion for innovation. It is perhaps therefore unsurprising that when it came to the clearance of the former 1GW site, the demolition scheme was equally as forward-thinking. And explosives engineering has laid at its heart.

The decommissioning project was one built on the cornerstone of collaboration, with ENGIE’s own personnel managing the two and a half-year assignment. RVA was engaged in 2016 as principal designer, tasked with providing specialist technical expertise and advice as works unfolded. This included writing the full specification of works and CDM EHS plan, and consultancy support during the demolition contractor appointment – with RVA assisting with tender analysis and selection from a technical perspective. Based on a balanced appraisal of the proposed techniques, extensive experience including in-house explosives engineering expertise, and the commercial robustness of the bid, the contract was awarded to Brown and Mason – a firm with a track record of demolishing over 50 power stations.

The project team was involved in stakeholder dialogue from an early stage, to ensure the local community felt informed and involved. Communications extended to domestic residents and multiple adjacent blue-chip businesses.

Details of the demolition programme were openly shared – both at the outset and during pivotal phases throughout – with consultation meetings held to give confidence in the team’s approach to health, safety, quality and environmental protection.

A website dedicated to the site redevelopment was also launched so that residents always remained in the loop, in advance and following each project milestone. Local crowd management was also planned for.

The sequence of events

Once mobilised on site, initial works focused on the removal of ancillary equipment and building interiors before the structural demolition activity could commence. Asbestos materials also had to be cleared and the structures certified as clean, to pave the way for explosives engineering activity.

10 explosively-initiated controlled collapses were planned for the project – more than may typically be associated with a power station demolition. However, the carefully selected team conducted a thorough engineering investigation and design, which allowed the buildings to be safely pre-weakened to maintain stability, while significantly reducing the quantity of explosives required. This proposed methodology also negated the need to utilise specialist machinery throughout.

All method statements were technically appraised by RVA and a collaborative process was deployed to develop these.

As the programme unfolded for each blowdown event, wider site preparations included deplanting works to clear all plant and equipment below the 40ft level of the main buildings – such as turbine sets, heavily reinforced concrete supports and the base sections of top-hung boilers.

RVA maintained an ongoing presence throughout the entirety of the project, visiting the site on a weekly basis to audit compliance with method statements, ensure EHS standards were being upheld, and act in an advisory capacity for the client. Given the scale, complexity and inherent risks associated with a project of this nature, this technical consultancy role cannot be underestimated.

The exclusion zone was well within the power station boundary fence, meaning there was no impact on the local road network – in fact, the only challenge was morning fog which put the blowdown back by merely 60 minutes.

There was similarly low community impact associated with every event that followed, including:

In preparation for collapsing the 5,000 tonne deaerator bay and 28m high turbine hall four months later, all pipework was cut to the adjoining boiler house, to ensure the separation of services entering the building. More explosives were naturally required to blow down these 112m long x 12m wide x 64m high, and 112m long x 62m wide x 28m high structures – with 14.34g of shaped charges and 201.6kg of kicking charges used. Away from the main gate and, again, barely visible offsite, there was virtually no community impact.

The same could be said for the fifth controlled collapse of the 8,600 tonne bunker bay – which, at this point in the project, represented the heaviest structure to have been blown down, and was the final explosives assignment before the national Covid-19 lockdown.

The team adapted quickly to government guidance and restrictions, ensuring the health and safety of on-site personnel just as they would in the face of any inherent demolition project risk. The workforce formed a bubble and operating procedures were devised to minimise risk of infection.

This agility meant that the sixth blowdown event – a 73m high boiler house – could take place in August 2020. The largest structure on the site, the 18,000 tonne steel structure was demolished in a controlled collapse which required 12.8kg of shaped charges and 121.2kg of kicking charges. Again, the community impact was minimal and there was no public viewing area, although video footage of the successful blast was naturally of interest to local media.

The blowdown of the power station’s 183m chimney was always going to be a more notable event, given its impressive height. In the weeks that preceded the collapse, the structure’s aircraft warning lights were disconnected, and the Civil Aviation Authority was notified so that aircraft were informed of the unlit chimney.

A test blast was also carried out to establish the correct charging requirements. Knowing there would be some debris, containers and Heras fencing with netting were installed for secondary protection. 50m long steel ducting – approximately 8m in diameter and 30m from the ground – was also removed one month before the blowdown, to enable the chimneys’ safe demolition. 3.6kg of machete 40 cutting charges, and 9.6kg of kicking charges were used, with on-site dust suppression minimising the environmental impact.

Covid-19 restrictions meant there could be no public viewing area as was originally planned, so the event was live-streamed on ENGIE’s YouTube channel. Extensive planning with two local authorities – including a road closure given a circa 400m exclusion zone which extended beyond the site boundary – minimised potential community disruption.

At the time of writing, the power station’s residual ducting, gas heaters and four high cooling towers, are all that remain. Works on the final metal ductwork were delayed slightly given the discovery of a nest, but guidance from an ecologist means a new date can be established once the birds have moved on in spring.

The internals of the cooling towers consist of a vast array of wooden supports, pipework and mist eliminator elements – and have been subject to a complex material removal process which, upon completion, will have taken twelve months. Test blasts have also been carried out in preparation for their collapse, and road closures have been planned to manage traffic on the day, once confirmed. These 117m high structures dwarfed all other buildings on the site in comparison, so this event will undoubtedly be the one that attracts most community attention: changing the local skyline and marking the start of a new future for the iconic power station site.